1.
any of various philosophies of self-defence and techniques of single combat
Here at Defensive Training Solutions, we believe everyone should have a complete personal protection plan.  This includes the ability to have both lethal and non-lethal self defense skills.   For this reason, we are proud to be able to offer courses which include both shooting and non-shooting courses.  Most of our courses do involve firearms training, so the first martial art we have chosen to offer here it Hojutsu.  We will be adding more to our course offerings in the future.
We are currently meeting in the classroom/dojo in Troy OHIO, on the 1st & 3rd Tuesdays of the month, and on the range on the 2nd & 4th Tuesdays of the month...and cost is $30 per person/month.  We take part in a regional seminar with Soke Jeff Hall every summer (usually in June) that is a seperate cost for students, this is encouraged but not required.  Uniforms (a traditional karate gi) is not required except for during the seminar with Soke Hall, and we do pursue belt rankings (additional costs for belts and testing fees), but it is not required.  Please contact us at This email address is being protected from spambots. You need JavaScript enabled to view it. or 937/673-6287 (Caryl's cell/text) with any questions about Hojutsu.
Please scroll over the MARTIAL ART heading and click on either "Range Training" or "Training Session"  for more info about our weekly trainings in Troy OH.
Hojutsu- The Martial Art of Shooting 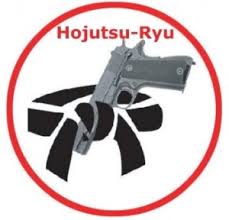 Hojutsu is the Japanese word for "the Art of Gunnery."  As practiced today, Hojutsu is the combination of the modern handgun technique and traditional Japanese budo.

"Hojutsu- The Martial Art of Shooting"

At first glance, the concept of shooting as a “traditional” martial art seems ridiculous. After all, martial arts are steeped in centuries of tradition, mysticism, and superhuman feats of skill; how can shooting a firearm compare with this? If you consider principles, rather than tools, shooting is clearly a martial art.  Stance, balance, focus, execution, and follow-through are the same, whether the hit is from a reverse punch or a .45.  We must master each of these elements of the technique before we can fight effectively.

As to tradition, at what point does learning a physical skill become a tradition?  I’m fairly certain that the first warrior to train with a katana was only looking for a tool that would save his life; better swords and effective techniques evolved into the formalized training protocol that became the way of the sword, but it probably developed through trial and error. Shooting has always been a martial art.  Martial, or military, was the primary reason for technological advancement in firearms.  We progressed from resin-wrapped bamboo tubes, to iron tubes, through a variety of ignition systems, to the sophisticated weapons of today.  However, no amount of technology will ever replace dedicated training with   professional instructors, and a lifetime of dedication to the shooting arts.

Firearms were introduced to Japan in the 1530’s by the Portuguese.  Although some purists disdained the new weapons, others embraced them.  The samurai, after all, were in the war “business”, and the addition of firearms added tactical and strategic advantages to those who used them. In the 1575 Battle of Nagashino, an army of peasant conscripts, armed with firearms, defeated the classically trained and armed army of Takeda Katsuyori.  This victory assured the inclusion of the firearm in Japanese military culture.  In typical Japanese fashion, a formalized, structured training discipline soon evolved.

Hojutsu, or “fire art”, is considered a koryu, or old tradition art, predating 1868.  It usually translates as “the art of gunnery”.  Since most modern shooters think of gunnery as artillery or crew-served weapons, I took the liberty of changing gunnery to “shooting”.  Hojutsu, then, is the “School of the Art of Shooting”.

In 1999, I was teaching an NRA rifle class in Fairbanks, Alaska.  In the evenings, I trained in the dojo of So-Shihan Charles Scott.  Master Kyoshi Yamazaki was in town for a clinic, and I invited him to the range during a lunch break.  After twenty minutes of training, Master Yamazaki was shooting tiny groups with a 1911 Colt.  Master Yamazaki caused my internal light to come on regarding the similarity in firearms and other martial training; I then set out to make modern shooting a recognized martial art.

There were initially three reasons to do so.  First, to recognize the years of dedicated training it takes to master firearms. Secondly, to integrate other weapons (hands, feet, sticks, knives) into the warrior’s gear bag.  Lastly, to strive for excellence in firearms training. A fourth benefit, discipline, soon became apparent (if we can build traditional martial training discipline into a young shooter, maybe we’ll have fewer idiots on the street!)

With the help of many great martial artists and shooters, I melded the Modern Technique with traditional Japanese training structure. I did not invent anything- I just formalized the concept that many of us have been talking about for years. My early firearms mentors included my father (a DSC and eight Purple Hearts), Jeff Cooper and Chuck Taylor, with later influence from Clint Smith and Louie Awerbuck, among others.  Grandmasters Mark Shuey and Dr. Charles Scott also guided me along this path.  This quest has resulted in induction into the U.S. Martial Arts and Universal Martial Arts Halls of Fame, recognizing Hojutsu as a martial art. What this means to those of you with no traditional background is that sober, life-long grandmasters agree that shooting is a martial art, and have “blessed” it, and made it legitimate in the martial arts world. As this is written, Hojutsu is the only formally recognized shooting art in the world.

In Hojutsu, we train in the dojo, in gis, in weapon retention, disarming, punches, kicks, sticks of all kinds, edged weapons, and ground fighting; we adhere to traditional protocol (bowing, meditation, etc.) during dojo sessions. On the range, in normal range clothing, we start with the handgun and progress through shotgun, carbine, revolver, precision rifle, and submachine gun.  Each handgun test becomes more difficult, until the sandan (3rd dan) test approaches Chuck Taylor’s Handgun Combat Master test, shooting 98% on three consecutive tests.  Standards require that a single miss outside the outer scoring ring is a failure of the entire test- the shooter must begin again. We use the “SJH” or Hojutsu target from www.letargets.com for testing. Before beginning training with the carbine, each student must also pass the shodan (1st dan) test with a revolver (how can you call yourself a gun guy if you can’t run a wheelgun?) At each level, the student must pass a written test on firearms, an oral test, write an essay on a given subject, master a kata (there are three katas, for first through third dan), and shoot accurately in compressed time frames. The written tests are on the history of the development of firearms- students have to know that the Glock did not arrive by fax from God (like the 1911 did!) Our goal is to develop fighters who can win when flat on their backs or 300 meters distant.

A typical seminar will run about four days. Each morning finds us training at the dojo for two hours, practicing weapon disarming and retention, empty-hand techniques, and kata.  The remainder of the day is spent at the shooting range, perfecting technique, improving speed and accuracy, and preparing for testing. Day four is test day.  We begin at 0800, at the dojo, for kata (the only subjective portion of the testing). On the range, the shooting portions of testing begin.  Three tests must be shot, in a specific order, at ranges from close-contact to fifty meters.  Depending on the test, times ranged from 1.1 seconds to 90 seconds.  To pass, students must have mastered speed and accuracy:  90% is required for shodan (1st degree black), 95% for nidan (2nd degree black), 98% for sandan (3rd black).  Each overtime is penalized from five to ten points, depending on the course.  After passing the shooting portions, the students must perform speed reloads, tactical reloads, and clear types one, two, and three malfunctions in compressed time frames.

Hojutsu is not for everyone. It has no appeal to some traditionalists who don’t think firearms belong in martial arts. Shooters with no martial arts background don’t understand the formality of dojo sessions (it is easier to turn a good martial artist into a shooter than vice versa!). You can acquire the same skills with firearms by attending classes at any of the schools I mention at the end of the article, without wearing pajamas and having to bow. Hojutsu is more about mindset than specific technique, but I require the Weaver stance, believing it fits better into an overall fighting system. At some point, technique is less important than principle, but we need to build a solid foundation- the Modern Technique is that foundation. Again, at some point, every martial art becomes an individual art; again, solid basics have to be mastered before free thinking can take place. Some feel the standards are too high (without high standards, what value does anything have? Go buy a black belt certificate on the internet…).

Since the art began, we’ve had an interesting cross-section of shooters begin training. Some, like Shihan Rod Kuratomi (Hojutsu 3rd Degree Black Belt), are dedicated, life long karateka; some are police SWAT officers, some are military. Some are highly advanced in both shooting and in traditional arts and quickly master the skills; others have started a long period of training. In January of 2007, eight Las Vegas Metro firearms instructors hosted a seminar and all eight earned brown belts, including the range sergeant, Rich Fletcher.   For those that are interested, Hojutsu provides one path, of many, to excellence in shooting and in integrated fighting. Hojutsu has dojos in Alaska, Texas, Washington, Colorado, Idaho, and California.  Classes are taught all over the U.S., and can be arranged at locations anywhere.  2008 will see seminars in Florida, Italy, and elsewhere. Students with no handgun experience should also consider classes from American Small Arms Academy, Gunsite, Thunder Ranch, Yavapai Firearms Academy, ITTS, or Front Sight.

We are all motivated by different things.  It may be NRA Distinguished Master, Handgun Combat Master, etc.  If six feet of black cotton cloth motivates you to train hard, come join us in Hojutsu- the fighting skills you learn just might also save your life.