Is it ever "OK" to point a gun at someone?

Is it ever "OK" to Point a gun at People?

I recently saw a video in my news feed of an Instructor working one on one with a student in a private lesson.This Instructor was allowing this student to 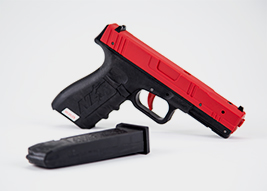 simulate drawing her gun from a holster, and rotate her elbow, and lock her wrist to what some call a retention shooting position.  Now this all sounds good so far, the “problem” is he was standing in front of her and the weapon was pointed at him. As I read through the comments, I read many people’s opinions. Comments like these:

Now these comments went on for a long while, and I will not comment as to their meaning or accuracy.

Don’t get me wrong, in this case, this guy made some mistakes, and fortunately, no-one was hurt.  After watching this, and reading these comments, I had to sit down and ask, Is it ever ok to point a firearm at someone else in training?

My answer may surprise you, more on that later.

A while back, I asked a group of students, “Is it ever ok to point a gun at someone else?” Every person in this class said without delay “NO!” So, I posed some scenarios to them. Here are the scenarios I asked them to comment on. Please read them, and answer to yourself…

Their responses were all “YES!”.  So, I ask again, Is it ever ok to point a gun at someone in training?

Well, I will say this, if the proper safety measures are taken, and there is a legitimate purpose for this training, then yes.  Now try not to get your feathers too

ruffled.  I am not advocating randomly grabbing a gun off the shelf in the classroom, and pointing it at everyone in the room. I don’t believe we should be pointing guns at students in basic firearms orientation class, or a basic concealed carry permit class. As a matter of fact, I think the times where pointing a gun at someone should be chosen very carefully, and have a very specific purpose. The context of the training must be very clear, and the results must outweigh any possible safety concerns.  I  believe there are very strict protocols that must be in place to insure the safety of the participants.  I also believe there are enough training aids such as Blueguns, Sirt Pistols, and other props, that the need for using an actual firearm is few and far between.

A colleague of mine recently worked with a group of law enforcement officers. They had AR-15s that had the Bolt Carrier Group removed, ECI( Empty Chamber Indicators) installed, and empty magazines inserted in the guns. All ammunition was removed from the training area, and everyone was patted down to ensure their pockets were empty. There was no risk of these guns being operational. This was this group of officers first foray into the FOF training. These guys were instructed to complete some drills, and some of these drills required, wait for it, pointing their duty weapon at another individual. An overwhelming 90% of these officers absolutely refused to complete this training at first. The question must be asked, if their lives were on the line, would they have been capable of pointing their guns at a felony threat? After some time, and work, they were all able to complete the training, and they all were thankful for the training they received.

I believe there is a need for stress inoculation in training.  Many law enforcement officers have an opportunity to participate in Force-on-Force training using Simunition/UTM guns. This gives them an opportunity to get shot at, and shoot back at people with paint-marker rounds in guns that look and act just like the guns they carry on duty.  This is a very efficient means of inducing stress into their training. This method of training allows them to see flaws in their training, and make corrections in a safe environment, but yes they are pointing guns at another person.

Many civilians can take ECQ (Extreme Close Quarters) courses using UTM/Simunition guns to help them understand that civilian defensive encounters happen very quickly, and are very violent. Without this training, they would never see the gaps in their training.  There are some things that are difficult, nearly impossible to train for while standing on a one-way range shooting slow fire at a paper target.

Have you ever participated in a combat sport? Boxing? Wrestling? Martial Arts?  All the training you do working on technique, working on a bag, shadow boxing seems to leave your mental consciousness the moment you get punched, kicked, or taken down.  Oh, maybe not, because in those sports, you train for Force-on-Force with a training partner who punches you, kicks you, takes you down and tries to hurt you.  So why is it ok to spar in that arena, but not do the same thing in a controlled environment dealing with something like a lethal force threat?

In closing, I will say this. I do believe we should be vigilant about safety when training.  I will also say we need to make time, and set aside the money needed to attend these courses, and get some Force-on-Force training.  Just make sure the person leading the class has a very strict set of safety protocols to ensure the participants do not get hurt.

Thank you for taking time out of your day to read this.

back to top
Joomla SEF URLs by Artio